NOVACOM was established by Frank and Detlef in November 1995 as a BGB company in Berlin.

Even if they didn't exactly meet on the playground, they did follow the same high school in Spandau in the early 80ies where they spent a lot of time together - also in front of the already popular computers. Especially the early Apple and Amiga models started their fascination.
As a logical consequence both of them started studying computer science at the TU-Berlin, which Detlef had already graduated from when the BGB company was established - long-time student Frank needed a little longer.

1997 the BGB evolved into NOVACOM limited corporation for Internet Services, Software Engineering and Consulting with both of the founders as managing directors.

In the year 2000 after a successful cooperation one of the leading market research companies in the automotive field acquired a minority status in the company.
This sale has turned out to be of advantage for all participating parties, and the cooperation has been intensified, professionalised and planned for the long term.

In that way until today we have been able to establish a range of projects with numerous solutions and products on the market.

From Spandau to Charlottenburg – this geographically short distance but with regards to content complicated move was already done by the owners years before the establishment of Novacom.
Ultimately they actually lived in the same apartment building close to the power station in Charlottenburg.
With the establishment of NOVACOM the legendary semi-permanent fixed connection with unbelievable 64 kbit data throughput was leased from Telekom and in this way a quasi-permanent line to the internet was consequently realised to the provider at that time – which was a real sensation back then.
Shortly after that a cable went along the front of the apartment building from the side wing ground floor to the 3rd floor garden house – the network was perfect!
The first servers were screwed together, put into operation and webpages were hosted. Almost like witchcraft. 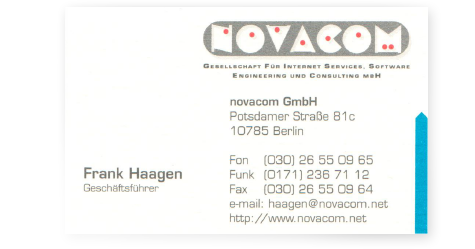 With increased consulting activity and the burgeoning experience the company, in order to actually make a living of it, moved to a curious space in an old building that was part of the Tagesspiegel in Potsdamer Straße.

Soon after this the company moved back to Charlottenburg, in the somewhat run-down northern part close to Gotzkowsky-bridge. The space had big rooms with light, and was situated in a former TU-building built in the late 1980es, but it was modern and possible to redesign a bit according to the taste of the owners.
In the new surroundings many different experiences were made with software development, many different employees, longer opening times, our veturo-Routenplaner and parties.
The first contact to LDB Löffler GmbH was made. But also 10 years of hassle with the property management - but always with a nice view on the Landwehrkanal and Spree.

The wish to design a working environment completely based on your own ideas remained.
In the year 2010 this wish came true when they purchased the complete 4th floor in an old factory building. A place where they could create their own idea of a work space.
The location – well ... if you didn’t only know and cherish Kantstraße and Kudamm long before the fall of the wall with the luxurious and relaxed chic of the shops and cafes, but also because of the surrounding clubs and bars like DNC, Flous, Untreu or Dschungel, then you won’t like what has happened to the area with the late night teleshops, fast food and supermarkets. The question of all questions: When is the Karstadt in Wilmi the next Karstadt to close its doors?
But in the second courtyard between fox, rabbits and lovebirds nothing has changed, and the automatic gate towards the street keeps the yard and work space quiet. 2 minutes away from the metro and five minutes from the regional train, parking space is in the courtyard. Very nice.

The blank disc and the idea

Lacking communication, but rich in worthless overhead. Isolated not integrated, one man show instead of team play. But also: Soundscape vs. dead silence.
Communication should be the main goal of the new work space concept – everybody should be visible and it should be easy to establish contact with anybody else without hassle or having to shout.
To achieve this all the walls except the kitchen and toilets had to be removed, and new walls and dividing walls had to be built.
Every plug socket and GB Ethernet socket, light switches, cable exits for alarm systems, electric lighting and the UPS-Concept was developed all on our own.… but take a look for yourself: 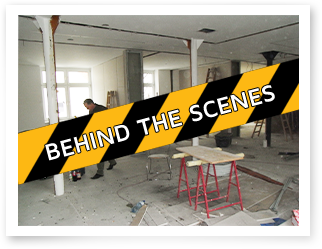 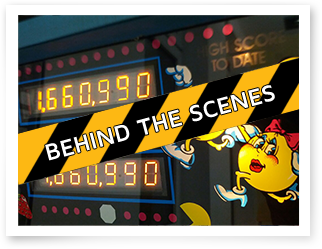 We are gonna celebrate!

894 days until our anniversary